How familiar are you with the Sea Scouts? Did you know that their history stretches back just as far as the Boy Scouts? We’re talking over one-hundred years of producing upstanding citizens that have a deep passion for maritime life and, as it turns out, green boating. I was blown away by just how much great work is happening with Sea Scouts and, more than that, I’m thinking that there’s not enough praise given to this organization that arms young men and women with the values and ideals to be good citizens with a maritime bent. Add a significant amount of environmental stewardship into the mix, and I have the makings for a Clean Boating blog entry. 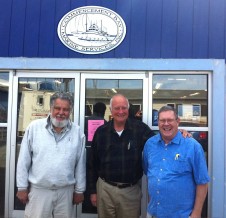 All of this illumination occurred with a simple site visit to Tacoma Youth Marine Center. Three stalwarts of that organization, Hank Hibbard, Bud Bronson and Tom Rogers (pictured here) walked me through their program, which began in 1924. Hank has been involved for over 25 years, Bud has spent over 30 years with Scouts but that’s nothing compared to Tom, who will hit 50 years with Sea Scouting next year. You are reading this correct. They are so passionate in the program that they beam when discussing the very real possibility that they are looking to work with their fourth generation of scouts in the very near future.

After this impromptu tour, I got into high gear. I picked up the phone and called the go-to man at Fisheries Supply, Jeremy Makin, whose name was dropped by the Tacoma Three as a graduate of their program. If you have ever placed a call to Fisheries, it’s probably gone through Jeremy at some point. In his free time, Jeremy isn’t one to sit around thinking about doing good. Rather, he’s deeply invested in the Sea Scout program in Edmonds. As Jeremy put it, “Hank and the guys in Tacoma were so influential to me as I came of age that now it’s my turn to do what they did for me.” Jeremy flashed pictures of their boat in Edmonds and exclaimed, “We are the best kept secret around. And we are trying to change that every day. “

Well, let’s see if we can do something about that, especially as it relates to Clean Boating. One key takeaway for me was that Sea Scouts doesn’t pay lip service to the importance of being good stewards. It’s even not enough for their crews to know about green boating. The remarkable part occurs when they rise up through the ranks. The further along they get, the more they are called on to teach green boating practices to their friends and family.  Now that’s powerful. If you think about what messages stick, messages that come from peers, friends and family are the most salient out there.

I’m relieved to see that the future of boating is in the hands of such leaders as Jeremy, Hank, Bud and Tom.  To think about the Tacoma program again, it’s staggering to think that they consistently graduate 10-15 percent of all Quartermasters (which is the Eagle Scout equivalent) throughout the country each year. That’s like saying that 15% of all the Eagle Scouts in the country come from one troop.

As Malcolm Russell, Executive Director of the TacomaYouthMarineCenter, said to me, “These guys are inspiring beyond words, truly special.”

Stay tuned for an in-depth view of what a typical outing with the Sea Scouts looks and feels like.